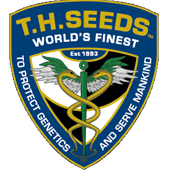 T.H.Seeds® was established in 1993, making it one of the oldest seed companies in Holland.

It began in the C.I.A. (Cannabis In Amsterdam), which was: a Cannabis information center, a world renowned seed shop,the first hemp store in Europe and, according to Robert C. Clarke (author of: Marijuana Botany, HASHISH!), "The epicentre of the Cannabis universe." T.H.Seeds® quickly gained an excellent reputation among the experienced growers who purchased T.H.Seeds®. Year after year, these growers return to buy more T.H.Seeds®. Most comment on how pleased they are with the consistency and quality of the T.H.Seeds® genetics. This positive feedback from the growers themselves is the solid foundation on which T.H.Seeds® has been built. T.H.Seeds® is a grower oriented seed company, we seek as much feedback from growers as possible.

Since its beginning T.H.Seeds® has been on the cutting edge of the New School Canabis Genetics. Born at a time when almost everything in Amsterdam was a mix of Northern Lights, Skunk and Shiva in various proportions, T.H. Seeds® has worked long and hard to bring new stable varieties onto the market. T.H.Seeds® was the seed company responsible for bringing the Original Bubblegum™ from the States, and was the first to sell the Bubblegum™ seeds (see New York Times, Feb. 1994). These Bubble Gum™ genetics helped numerous Coffeeshops win many High Times Cannabis Cups over the years.

Following the Bubble Gum™, T.H.Seeds® brought the S.A.G.E. ™(Sativa Afghani Genetic Equilibrium™) from the high mountains of central California to Holland. Named "S.A.G.E."™ because of its distinctive spicy smell and taste, this plant's Haze-y flavor and high will fool you into thinking it is a pure Haze variety. But when you grow it you will not experience the low yields of all other Haze varieties. The large yields you get come from the Afghani side, but without overpowering this plant's superior Haze flavor. For two years the THC percentage of the 50 varieties entered by all the coffeeshops and seed companies entered in the High Times Cannabis Cup was established. The S.A.G.E.™ scored 3rd(1998), and 2nd(1999) highest THC with over 20%. Both years this THC ranking was higher then any of the Coffeeshop or Seed Company Cannabis Cup winners! And the one year (1999) the S.A.G.E.™ water hash was entered in the Cannabis Cup it won again.