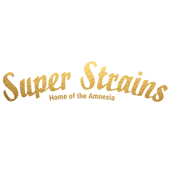 SuperStrains is a seed company founded in 2010. But in truth, their work existed for decades before that as sub-activities of the fertilizer manufacturer, HY-PRO.

The combination of these disciplines has ensured that SuperStrains, today, occupies the leading position in its field.

Due to years of breeding and the endless combination of desirable properties such as vegetative growth, bloom times, taste, effect, resistance etc, they managed to create a  legendary strain, now known all over the world as Amnesia.

There is still no other strain available like the legendary Amnesia despite it now being over 20 years old.

It is from the vast choice of genetics from which the current assortment of SuperStrains has been distilled.

The genetics offered by SuperStrains are all created with the specific needs of the user and location in mind. Whether it is recreational or medicinal, outside or inside and even as a final product or as a raw product for further processing, SuperStrains has the right strain for you.

With Amnesia as their flagship strain it would be an error to overlook the rest of their collection.

Besides her famous daughter there is, for example, Enemy of the state, the mother of Amnesia. It is a particularly potent Indica with a unique musky scent and taste.

Despite her old age (circa late ‘80s), she is still very popular, and since the emergence of medicated marijuana, her analgesic properties are highly significant to this popularity.

It is also the most Indica dominant strain in the SuperStrains catalogue. Their assortment ranges from El Cucaracha, 7th Wave, Next of Kin and eventually Amajikoym as their most Sativa dominant strain.

As mentioned, the assortment is composed of the best available properties per variety, as such the range is in itself, very well organized.

Today, the activities of SuperStrains mainly focus on genetic heredity and consistancy of their strains.