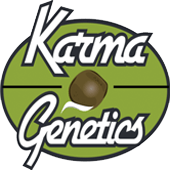 Karma Genetics officially started in 2008 after winning a cup at the IC420 cup in Amsterdam. However, they started breeding officially in 2000 and have been working in the Dutch canna-scene since 1996, starting in a coffeeshop and later running a local grow-shop.

The slogan that Karma Genetics live by is ‘Keeping It Real’. They strive for open honest breeding history, take time to breed, and are woven in to the old growers network; they have ethics and respect for our companion breeders.

Karma Genetics seeds are bred fully in-house. The breeders take time and pride in their work, which is why it takes them longer than most to create a new strain. However, this hard work and time pays off as Karma are now known for their OG Kush true breeding lines worldwide.

Alongside their immensely popular strains including Biker Kush, White OG and Smelly Headbanger, Karma Genetics are also set to release some brand new strains in the near future, including collaborative efforts with the rest of the Karma Squad, a unique collective of breeders and friends.

Despite their relative infancy in terms of their existence as a seedbank, Karma Genetics are one of the most popular breeders in the world today and have gained plaudits from customers and members of the industry alike.